Microsoft Windows is a series of graphical interface operating systems developed, marketed, and sold by Microsoft. Microsoft introduced an operating environment named Windows on November 20, 1985 as a graphical operating system shell for MS-DOS in response to the growing interest in graphical user interfaces (GUIs).

Windows 10 is a personal computer operating system developed and released by Microsoft as part of the Windows NT family of operating systems. It was officially unveiled in September 2014 following a brief demo at Build 2014. The first version of the operating system entered a public beta testing process in October 2014, leading up to its consumer release on July 29, 2015. 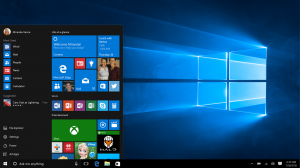 If you want to buy this product please visit our Shop